When the slim percentage of Polish Jewry that survived the Holocaust returned home from the ghettos and concentration camps, they were not readily accepted back into the folds of Polish society.

“They were physically present but socially absent,” Polish historian Lukasz Krzyzanowski tells The Times of Israel via Zoom call from his book-lined study in Warsaw. “Polish Jews after the war felt alone and socially isolated because there was no compassion or empathy forthcoming from their [non-Jewish] Polish compatriots.”

In his book, “Ghost Citizens: Jewish Return to a Postwar City,” Krzyzanowski examines this phenomenon by focusing on the mid-sized industrial city of Radom, located in the center-east of Poland, between the years 1945 and 1950.

“After the war there was a complete change to the social fabric of Radom,” says Krzyzanowski, who is an assistant professor at the Polish Academy of Sciences. “Not only with the disappearance of the Jews, because most of them were murdered, but those Jews who survived and returned were absent in a social sensibility.”

“These Jews were citizens, but they were not seen as citizens by most of their compatriots after they returned from the war,” Krzyzanowski says.

The historian is reluctant to get into a detailed discussion about Holocaust memory politics in contemporary Poland. But he does claim that most Poles today are “unwilling to accept the bitter fact that they live in a post-genocidal land.”

The historian suggests a lack of empathy is the biggest problem. 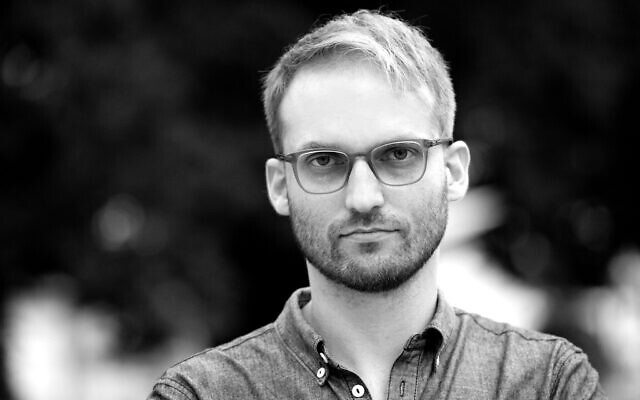 “You can see that lack of empathy in the [general] attitudes of Poles towards the Holocaust,” says Krzyzanowski. “Polish Jews that were killed in the Holocaust were killed because they were Jewish. But they were Polish citizens, and the Polish state cannot just forget that.”

“Those Jews deserve exactly the same commemoration and recognition of the tragedy as Christian Poles who were killed during the Second World War, which is often not the case,” he says.

Krzyzanowski’s book mainly delves into Jews returning to Poland in the immediate post-Holocaust period. But it also looks at pre-Holocaust Polish Jewry in a broader European historical context.

“Anti-Semitism didn’t suddenly appear in Poland with Hitler,” Krzyzanowski says. “There was a distance between the Polish Jewish and Christian populations before the war. But during the Holocaust this distance turned into a chasm, and it’s stayed like this ever since.” 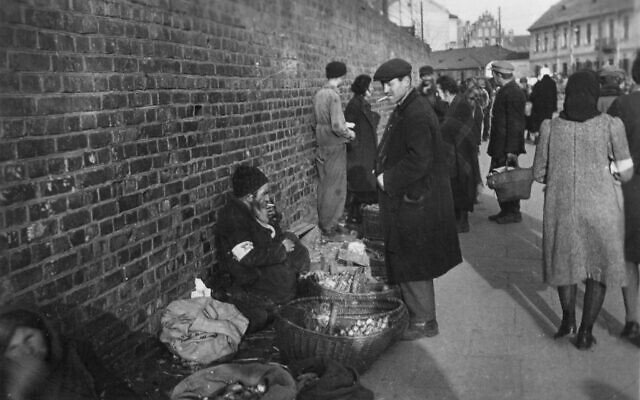 Open-air market on Wałowa Street in the Radom ghetto, between April 1941 and August 1942. (Courtesy Łukasz Biedka)

The history of the Jews in Poland stretches back more than 800 years. On the eve of World War II, Poland’s Jewish population of 3.3 million was Europe’s largest. Yiddish was mostly the lingua franca, and the vibrant community played a vital role in the public, civic, commercial, intellectual and spiritual life of sophisticated cosmopolitan multicultural Polish cities such as Warsaw, Wilno, Kraków, and Lublin. 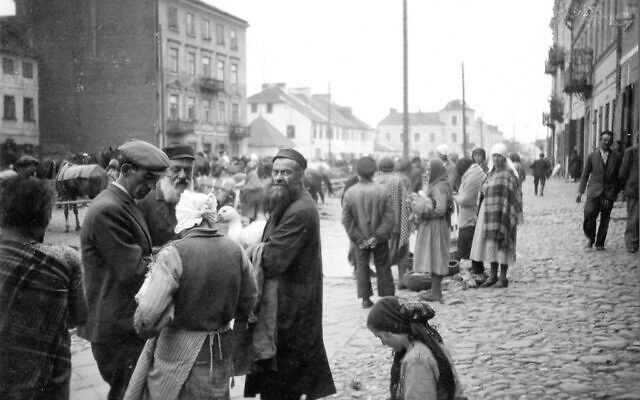 Farmers market on Wałowa Street in the heart of the Jewish neighborhood before World War II. In the spring of 1941, the street became a main artery of the large Radom ghetto. (Courtesy Chris Webb)

It’s estimated that 90 percent of Polish Jews were murdered by the Nazis and their collaborators during the Holocaust. Some were shot in ghettos. But most Jews were sent to gas chambers by train in six secretive purpose-built death camps across occupied Poland: Chelmno, Belzec, Sobibor, Treblinka, Majdanek and Auschwitz-Birkenau. Krzyzanowski says the exact figure of Polish Jews who were murdered — and who survived — during the Holocaust will never be fully known.

“Poland is the only country [in Europe] where there is not even a close approximate [documenting] the victims of the Holocaust,” says Krzyzanowski. “It is estimated, however, that the highest figure of Jews that populated Poland after the war came in the summer of 1946, around 244,000.” 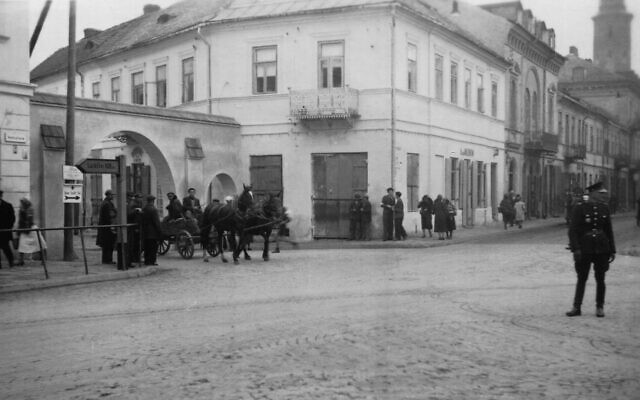 Main entrance to the large ghetto in Radom. On the right, an officer of the Polish ‘Blue’ Police managing the traffic. (Courtesy Łukasz Biedka)

“But that figure did not mean all of these Jews were necessarily returning,” says the historian, or even staying if they did.

Indeed most Polish Jews emigrated. Some went to British Mandate Palestine (which became the State of Israel in 1948). But the majority went to Canada and the United States. Those Jews who decided to stay in Poland encountered numerous problems. Finding a place to live proved especially difficult. The historian uses the city of Radom as a micro case study to tell the larger story of Jews in postwar Poland more broadly. 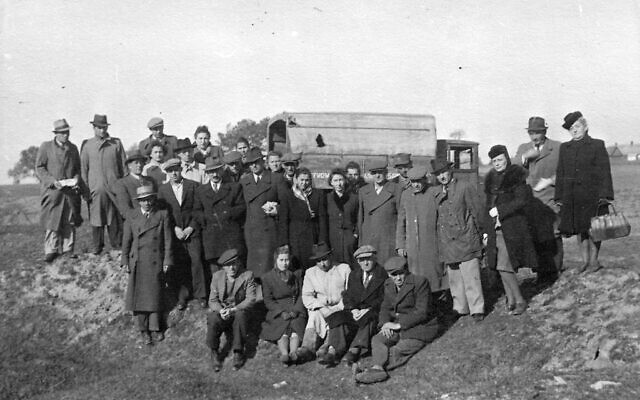 Krzyzanowski notes that on the eve of WWII, the 30,000 Jews of Radom constituted nearly 30% of the city’s population. But most of these perished in the Holocaust, which left a number of vacant properties in the city. The small number of Jews who did survive and wished to return to their previous addresses in Radom found themselves in a tricky situation, however: The properties they once legally owned were now inhabited by strangers.

Properties of Holocaust victims were generally passed on to the Polish state who passed them on to private Polish citizens. This was based on the assumption that Jews who hadn’t returned within a certain time frame had probably been murdered by the Nazis.

Krzyzanowski notes that some Jews won their properties back in the courts. But most ended up selling them well bellow market rate. Anti-Semitism played its part in these complicated bureaucratic legal wrangles. So, too, did the shadow of Moscow politics around 1945 as the Iron Curtain was descending over Eastern Europe and Poland was on course to become a satellite Soviet state.

“In 1945 Poland was not entirely a communist country,” Krzyzanowski says. “So these returnees are in a very peculiar time of history: Poland is rebuilding itself from war, but the political and economic system are in a transformation period as the Cold War is beginning.”

Poland is rebuilding itself from war, but the political and economic system are in a transformation period as the Cold War is beginning

“The Polish courts in 1945 are trying to operate in Poland according to the prewar standards,” says Krzyzanowski. “But the rule of law is gradually being changed, particularly to ideas like citizenship and property ownership.”

The historian notes that this led to a number of Jewish Honor Courts being set up across Europe in the immediate postwar period, including one in Poland. 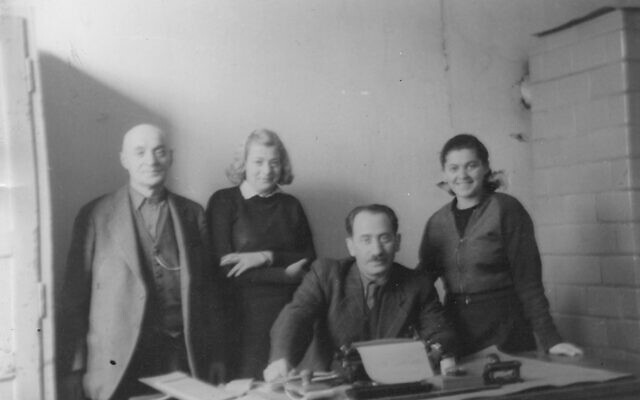 The office of the post-war District Jewish Committee in Radom. (Courtesy Barbara Fundowicz-Towarek)

The biggest judgment the Jewish Honor Court could give was to exclude someone from the Jewish community, he says, since the courts didn’t have any penal measures and couldn’t hand down legal sanctions.

The historian notes that many of these Jews came from the Judenrat, or Jewish councils set up within the Jewish communities of Nazi-occupied Europe on German orders. The role played by the Judenrat is one of the most controversial aspects of the Holocaust. They were members of the Jewish elite who would later be accused by some in their own communities of having collaborated with the Nazis.

Krzyzanowski stresses in his book that most Jews during the Holocaust were naturally adapting to survive. The historian does quote some of the Judenrat’s harshest critics, however. 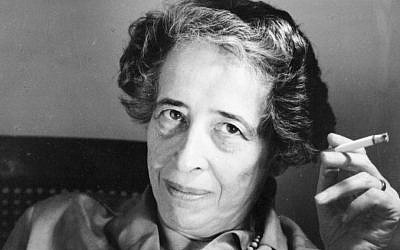 Among them was Hannah Arendt, the German Jewish philosopher who witnessed the trial of Adolf Eichmann in Jerusalem in 1961 and later reported those details in the New Yorker, in a report which eventually became a controversial book, “Eichmann in Jerusalem: A Report on the Banality of Evil.”

Arendt’s judgment was unequivocal: the Judenrat during the Holocaust had helped send their fellow Jews to their deaths. “To a Jew,” Arendt wrote, “this role of the Jewish leaders in the destruction of their own people is undoubtedly the darkest chapter of the whole dark story.”

The Polish historian takes a more nuanced view, though. “Members of the Judenrat were destined to death just like any other Jews and did not survive,” he says. “So they were not just another collaborating body in Europe.”

“The Judenrat were [predominantly] seen by many members of the community as collaborators,” says Krzyzanowski. “But they were people of influence in the extreme and very difficult conditions of the ghetto.”

Krzyzanowski’s book also spends its time and effort looking at the numerous threats Radom Jews faced in their daily life in the immediate postwar period. They were regularly confronted with the threat of theft, abuse and violence. This came mostly from Polish citizens struggling in a country ravaged by war, poverty and political chaos. But the historian stresses that anti-Semitism was rampant in the police and security services of Radom, and across Poland more broadly, at this time.

“The police were very reluctant to investigate racially motivated crimes against Jews [in Radom],” says Krzyzanowski. He notes a brutal crime in Radom where four Jewish survivors were murdered execution-style in a Jewish cooperative.

“There is no trace that this crime was thoroughly investigated by the Radom police,” he says. 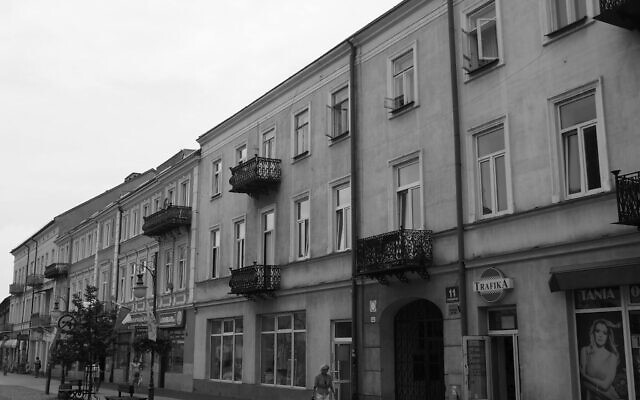 Building at 11 Zeromski Street in Radom where a Jewish policeman lived and where he was killed in July of 1945, just months after liberation from the Nazis. (Photo by Lukasz Krzyzanowski)

The historian claims it was a common trend at the time. Levels of anti-Semitism were precipitous in Polish society during the immediate postwar period. And so the Polish government generally tended not to condemn anti-Semitic violence and simply looked the other way instead.

“This was a period in Poland’s history when the communists did not have [power] from the beginning so they had to earn their popular support,” the historian says. “And knowing that the anti-Semitic prejudice was high in the society, they did not want to sympathize with the victims of anti-Jewish violence.” 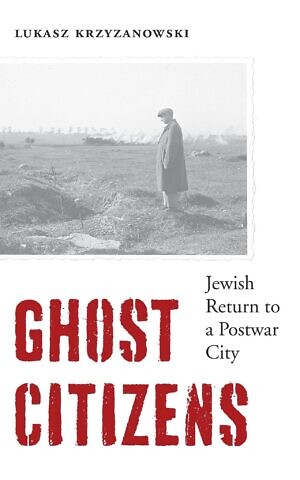 The historian stresses that returnee Jews who attempted to build a normal life again in Radom didn’t find it. But that didn’t stop a select few stubborn ghost citizens from soldiering on and suffering in silence.

1950 was a watershed moment that marked the end of an era for Radom Jews: The Jewish community publicly erected a monument commemorating local Holocaust victims. But that was to be the very last public appearance in Radom for Jews as a collective united community.

“That does not mean all of these Jews left Radom immediately in 1950,” says Krzyzanowski. “Some of them stayed in Radom and only died in recent years.”

“Some Jews may have kept in private contact with each other in Radom, but they never showed themselves in the city as a community again,” Krzyzanowski concludes. “And there was never any Jewish institution in Radom after 1950.”