The author is chairperson of the Vilnius Committee for Preservation of Piramónt (Šnipiškės) Cemetery. A selection of his English articles is available here.

Coronavirus-era court hearings are necessarily small in attendance, but that doesn’t take away from their potential historic import. Our small Defending History team, as usual, monitored today’s hearing at Vilnius District Court in the case brought by over a hundred descendants of people buried in the Old Vilna Jewish Cemetery at Piramónt (Shnípeshok, today’s Šnipiškės district in modern Vilnius, capital of Lithuania). They are asking for their family’s burial grounds, purchased in freehold perpetuity, to be defiled and humiliated by erection of a new national convention center based in the current Soviet ruin of Sporto Rumai (“The Sports Palace”) with construction of a large annex from the start. The case if part of a wider movement, local and international, calling on the Lithuanian government to move the convention center project away from the Old Jewish Cemetery to a new and morally clean venue. Issues of human and equal eights have arisen. This would never be the fate of a Lithuanian or Christian cemetery, as pointed out by the European Foundation for Human Rights which has taken an on-the-record interest in the case.

Turning to today’s hearing, the legal question under consideration was the request by the plaintiffs (the 100+ descendants) for the court to stop the planned imminent construction work on the site, or, in legal terminology, “termination of activities which creates a real threat of damage in the future” (Lith. “dėl uždraudimo atlikti veiksmus, sukeliančius realią grėsmę žalos padarymo ateityje galimybę”). It is case no. e2-625-918/2020.

In the “real world” there is no debate over where the planned new national convention is slated to stand, or put differently, what is the location of the Soviet-era Sports Palace building (now a ruin) meant to become the prime building of the new convention center. As the American Embassy confirmed in 2006, in a wire released by Wikileaks: “The Sports Palace property indisputably rests in the middle of the former cemetery. Archaeological surveys from 1996-1998 show the existence of undisturbed graves in the immediate vicinity of the Sports Palace. During construction of a road adjacent to the Sports Palace property during 2001-2003, the scattered remains of some 700-800 individuals were unearthed and reburied in a Jewish cemetery just outside Vilnius.” Moreover, ground radar projects in later years have confirmed extant burials wherever the survey was allowed to look.

But the judge in today’s hearing left it an open question, giving implied support to the position of government bodies, politicians, builders and the state-run Turto Bankas (“State Property Bank”), which has come up with the legal position that the convention center (and annex!) will “not be on the territory of the cemetery” in the spirit of a Cold-War era island of West Berlin in the heart of East Germany.

The issue was crystal clear from the onset, namely that the Sport and concert palace have been built right in the middle in the cemetery, the judge left it to be an open question.

Answering this claim was the plaintiffs’ expert witness today, Professor Josif Parasonis, a founding member of the Vilnius Jewish Community and major national expert on the science of buildings (which he has been teaching for decades at Vilnius Gediminas Technical University). His expertise was recently sought by city authorities for the stabilization of Gediminas’s Hill. Prof. Parasonis explained that to clarify where the cemetery and development area overlaps, in 2005 the special group drafted the border line of the cemetery and other objects in the surrounding area. As a result, the map was drawn and signed by the officials and experts making the draft an official document, which actually shows the Sport and concert palace is right in the middle of the cemetery. Prof. Parasonis concluded that the documents purporting to show the convention center is outside the cemetery “is not a true legal document,” is “inaccurate” and is in fact, an artful mix-up of three separate drawings on one page. This summary cannot do justice to Prof. Parasonis’s detailed forensic report on the documents of 2005, 2008, 2015, and 2020, and their failings, most notably the inadequate work of the Historical Institute which would superimpose old maps in a way that would put the cemetery in the nearby River Neris (Viliya). An accounting of Prof. Parasonis’s findings will hopefully appear separately on these pages. 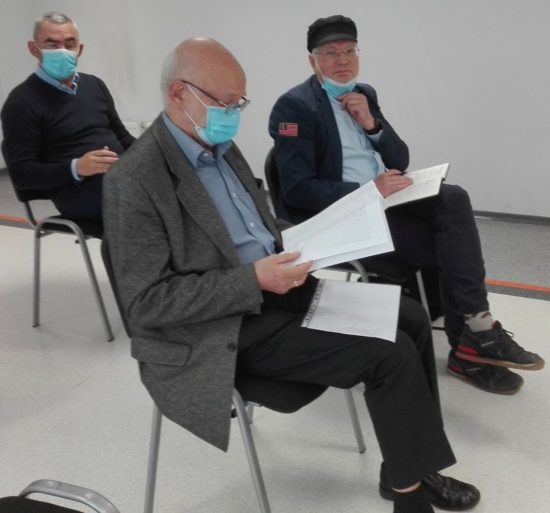 Center: Professor Josif Parasonis looks over his papers before testifying on behalf of the 100+ plaintiffs. To this right: Julius Norwilla. Seated behind:: Efim Hiterer, one of the observers.

Assistant attorney Salvija Sriubienė, speaking for the 100+ plaintiffs, asked the judge to invite the representative or expert the Department of Cultural Heritage to  the next hearing to explain how it came to be that the Sport and concert building was “not inside” the cemetery site. The judge, Aistė Petravičienė, ruled there is no need for that.

For the 100+ plaintiffs (descendants of those buried in the cemetery): assistant attorney attorney’s assistant Salvija Sriubienė and attorney Modestas Sriubas. Photo: Bill Pahl for DefendingHistory.com.

As readers of Defending History know, the major international Lithuanian tradition (Litvak) rabbinic court in Bnei Brak, Israel, has issued a powerful ruling prohibiting the further desecration and humiliation of the old Vilna cemetery by a new convention center in its very heart.

But the lawyers for Turto Bankas Ernestas Knezevičius and the head of its own “Project Unit,” Karolis Maželis steadfastly opposed admitting the Bnei Brak ruling. Speaking for the defense, and in effect in some larger sense for the government, they insisted to the judge that the papers of the Bnei Brak decision not be admitted in evidence (“added to the legal package” in local terminology). 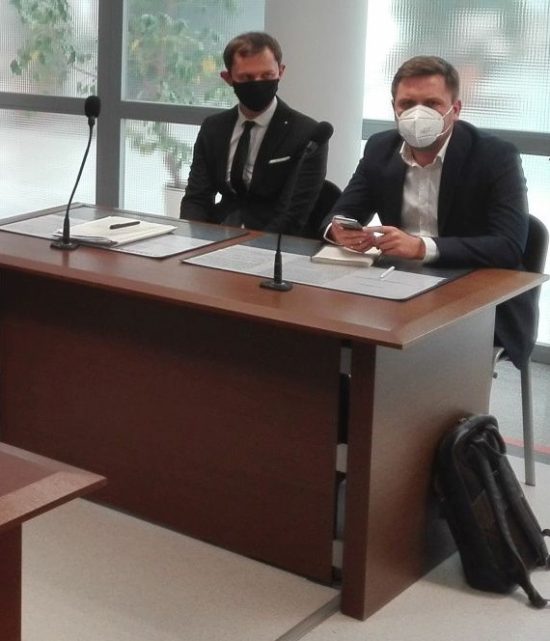 Attorney Ernestas Knezevičius (laeft) and the head of the Project Unit of the State Property Bank, Karolis Maželis. Photo: Bill Pahl for DefendingHistory.com.

The bombshell came when it was time for supporting evidence for barring from the court’s consideration the top Litvak rabbis in the world for Lithuania’s oldest Jewish cemetery, in effect claiming that the Hungarian-Romanian tradition Satmar rabbis in London, from the discredited CPJCE, proven to take secret payments for their “supervision” of works on the cemetery, were the only legitimate representatives for a cemetery in Lithuania. These payments are documented in Wikileaks, and were reported on years ago by  Defending History, JTA,  and the Jerusalem Post.

The purported evidence for disallowing the rabbinic judgment, to which were added the signatures of the major international Heads of Yeshivas whose very names continue the proud tradition of Jewish Lithuania, Pónevezh (today’s Panevėžys), Slabódke (Vilijampolė), and Telz (Telšia)? This came in the form of a document from the Lithuanian Embassy in Tel Aviv determining that the jurisdiction of the court in Bnei Brak doesn’t extend to the issues related to  Jewish cemeteries internationally, and the court has no jurisdiction in the Republic of Lithuania.

In fact, the document provided to the court by Turto Bankas  certifies the ruling  by the Lithuanian Embassy in Israel (as if it were the grand moral authority here!) concerning the remit and authority of the major Litvak rabbinic court internationally:

“The defendant submits a letter from the Embassy of the Republic of Lithuania in the State of Israel confirming that the courts of the Israeli rabbis are authorized to conduct court proceedings related to the marriage and divorce of Jewish persons in Israel. The said courts also deal with matters relating to the division of property, the payment of alimony and bequests. In addition, the jurisdiction of the Israeli rabbinical courts extends only to the State of Israel and has no legal force in other states.”

The lawyers for Turto Bankas argued, in effect, that instead of the rulings by the major international Litvak tradition rabbis, the court should accept into evidence the letter from the Lithuanian Embassy in Tel Aviv! Moreover, the “decision” by a secular embassy that the top Litvak rabbinic court only has authority over local divorces and the like, is an obvious mockery of the hundreds of thousands of religious Litvaks around the world who have so hoped to restore cordial and mutually productive relations with an ancestral homeland of some seven centuries’ vintage.

This was all the more shocking given the publicly sympathetic stance exhibited by Lithuania’s ambassador to Israel, HE Lina Antanavičienė in a well-known January 2020 video of her meeting with the major Litvak rabbis (at which she also promised that there 2ould be “no new building works” on the cemetery).

Updates in the Saga of the Old Vilna Cemetery

For me (and others) it was not clear whether the judge decided to omit the Litvak rabbinical rulings from the evidence to be considered as the case moves on.

The judge repeatedly expressed her annoyance that the documents provided by the plaintiffs have been presented to the court just one day before hearing and ruled the next hearing to be after familiarizing herself with the newly sent documents and scheduled 9:30 AM next Tuesday 6 October. To find it online, open the court’s website, then > “Teismas” (the court), then > final item “Vilniaus miesto apylinkės teismas”  (Vilnius District Court) > Bylos (case no.) > e2-625-918/2020. Then confirm “As ne robotas” (I am not a robot) and click “Ieskoti” (search).

Today’s hearing was the second in the case. The first was on 24 of February 2020. At the first hearing the judge announced there will be two more hearings: on 7 May 2020 and 14 May 2020. The pandemic and lockdown worldwide have altered the initial ruling to postpone the planned hearing to 1 October (today), presumably meaning that the 6 October hearing announced (For next week) could be the final one. The date occurs in the intermediate days of Succoth (Feast of Tabernacles), when it is religiously very difficult for observant Jews to travel abroad. There had been wide hopes among Vilnius’s Jews that one of the hearings would be graced by the live appearance of the world’s top scholarly specialist on the cemetery’s history, Prof. Shnayer (Sid) Leiman of New York, or the spiritual leader of international efforts to save the cemetery, Rabbi Elchonon Baron of Jerusalem, or, preferably, both. It was to the delegation led by Rabbi Baron that the Lithuanian ambassador to Israel made her various commitments in January of this year (video). More recently, he issued an impassioned videod plea from Jerusalem’s Western Wall, after Turto Bankas and the Vilnius City Council released plans for a large new annex in addition to the main “convention center in the cemetery.”

Observers of today’s proceeding included Ruta Bloshtein, author of the international petition that has attracted some 52,000 signatures, and Arkady Kurliandchik, elected board member of the Vilnius Jewish Community.

Ruta Bloshtein, author of the international petition, and Vilnius Jewish Community board representative Arkady Kurliandchik were on hand to observe the proceedings. Photo: Bill Pahl for DefendingHistory.com.

The state-sponsored “Lithuanian Jewish (Litvak) Community,” steadfast supporters of the Hungarian-origin and allegedly corrupt London-based CPJCE, did not send an observer. Nor, for that matter, did the CPJCE itself, which was recently stripped of any authority to meddle further in Vilnius by a decision of the Conference of European Rabbis (CER), that came after the CPJCE’s refusal to appear before a rabbinic tribunal over its record of bizarre activity in historic Vilna, once known as — Jerusalem of Lithuania.

One could not leave today’s hearing without feeling the disturbing dissonance between a state policy of declaring 2020 to be the Year of the Gaon of Vilna, while pursuing further desecration of the cemetery where the Gaon’s relatives lie buried, and mocking the Jewish communities worldwide that are so proud to have the names of Lithuanian towns in their current and permanent identities, while flaunting “permissions” from discredited Hungarian-origin rabbis in London who have been exposed for allegedly corrupt behavior in taking secret large payments for their providing cover for the desecration of Jewish cemeteries in the lands of the East European Holocaust, where it often happens that there is no critical mass of survivors to defend their ancestors’ graves. 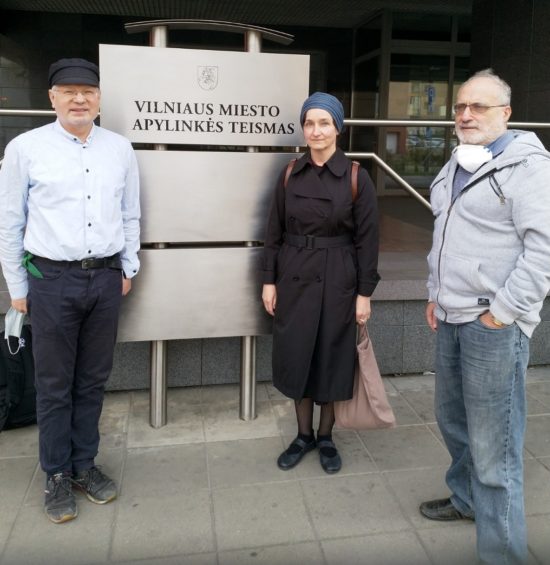