POLIN Museum of the History of Polish Jews (Polish: Muzeum Historii Żydów Polskich) is a museum on the site of the former Warsaw Ghetto. The Hebrew word Polin in the museum’s English name means either “Poland” or “rest here” and relates to a legend about the arrival of the first Jews to Poland.[1]

The museum’s cornerstone was laid in 2007, and the museum opened on 19 April 2013.[2][3] The core exhibition opened in October 2014[4] and features a multimedia exhibition about the Jewish community that flourished in Poland for a thousand years up to the World War II Holocaust.[5]

The building, a postmodern structure in glass, copper, and concrete, was designed by Finnish architects Rainer Mahlamäki and Ilmari Lahdelma.[6] 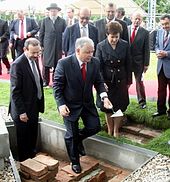 President of the Republic of Poland, Lech Kaczynski, at the groundbreaking ceremony for the POLIN Museum, 26 JDariusz Stolaune 2007

The idea for creating a major new museum in Warsaw dedicated to the history of Polish Jews was initiated in 1995 by the Association of the Jewish Historical Institute of Poland.[7] In the same year, the Warsaw City Council allocated the land for this purpose in Muranów, Warsaw’s prewar Jewish quarter and site of the former Warsaw Ghetto, facing the Monument to the Warsaw Ghetto Heroes. In 2005, the Association of the Jewish Historical Institute of Poland established a private-public partnership with the Polish Ministry of Culture and National Heritage and the City of Warsaw. The Museum’s first director was Jerzy Halbersztadt. In September 2006, a specially designed tent called Ohel (the Hebrew word for tent) was erected for exhibitions and events at site of the museum’s future location.[7]

An international architectural competition to design the building was launched in 2005, supported by a grant from the Ministry of Culture and National Heritage. On June 30, 2005, the winner was announced by the jury as the team of two Finnish architects, Rainer Mahlamäki and Ilmari Lahdelma.[8] On June 30, 2009, construction of the building was officially inaugurated. The project was completed in 33 months at a cost of 150 million zloty allocated by the Ministry and the City, [a] with a total cost of 320 million zloty.[10][11] It is financially supported by annual funds from the Polish Ministry of Culture and Warsaw City Council.[12]

The building opened and the museum began its educational and cultural programs on April 19, 2013, on the 70th Anniversary of the Warsaw Ghetto Uprising. During the 18 months that followed, more than 180,000 visitors toured the building, visited the first temporary exhibitions, and took part in cultural and educational programs and events, including film screenings, debates, workshops, performances, concerts, and lectures. The Grand Opening, with the completed Core Exhibition, took place on October 28, 2014.[13] The Core Exhibition documents and celebrates the thousand-year history of the Jewish community in Poland that was decimated by the Holocaust.[4][5] 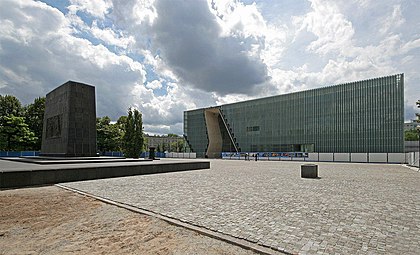 Museum faces the Memorial to the Warsaw Ghetto Uprising

The Museum faces the memorial commemorating the Warsaw Ghetto Uprising of 1943. The winner of the architectural competition was Rainer Mahlamäki, of the architectural studio ‘Lahdelma & Mahlamäki Oy in Helsinki, whose design was chosen from 100 submissions to the international architectural competition. The Polish firm Kuryłowicz & Associates was responsible for construction. The building’s minimalist exterior is clad with glass fins and copper mesh. Silk screened on the glass is the word Polin, in Latin and Hebrew letters. 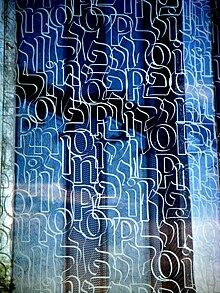 Hebrew and Latin letters of the word Polin

The central feature of the building is its cavernous entrance hall. The main hall forms a high, undulating wall. The empty space is a symbol of cracks in the history of Polish Jews. Similar in shape to gorge, which could be a reference to the crossing of the Red Sea known from the Exodus. The museum is nearly 13,000 square meters of usable space. At the lowest level, in the basement of the building will be placed a main exhibition about history of Jews from the Middle Ages to modern times. The museum building also has a multipurpose auditorium with 480 seats, temporary exhibition rooms, education center, information center, play room for children, café, shop, and in the future kosher restaurant.

Since the museum presents the whole history of Jews in Poland, not only the period under German occupation, the designer wanted to avoid similarities to existing Holocaust museums (such as the Jewish Museum in Berlin and the museum at Yad Vashem) which had austere concrete structures. The architects kept the museum in the colors of sand, giving it a more approachable feeling.[15] 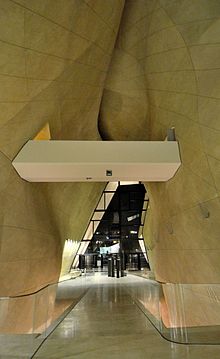 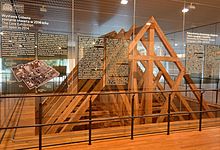 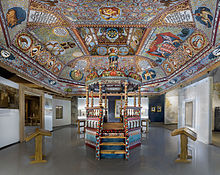 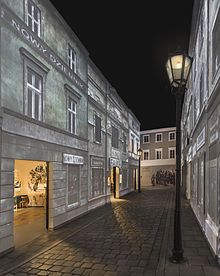 “On the Jewish Street” gallery with entrances to exhibition halls

Traditional Mezuzah at the entrance

Facing the Museum, is the Monument to the Ghetto Heroes

The interior design was conceived and master-planned by London-based museum design consultancy, Event Communications, along with local firms.[16]

The Core Exhibition’s academic team consists of Barbara Kirshenblatt-Gimblett (Program Director) of New York University, Hanna Zaremska of the Institute of History of the Polish Academy of Sciences, Adam Teller of Brown University, Igor Kąkolewski of the University of Warmia and Mazury, Marcin Wodziński of the University of Wrocław, Samuel Kassow of Trinity College, Barbara Engelking and Jacek Leociak of the Polish Center for Holocaust Research at the Polish Academy of Sciences, Helena Datner of the Jewish Historical Institute, and Stanisław Krajewski of Warsaw University. Antony Polonsky of Brandeis University is the Core Exhibition’s chief historian.[19]

American Friends of POLIN Museum of the History of Polish Jews is a U.S. based non-profit organization supporting the foundation of the Museum.[20]

On June 17, 2009 the museum launched the Virtual Shtetl portal, which collects and provides access to essential information about Jewish life in Poland before and after the Holocaust in Poland. The portal now features more than 1,240 towns with maps, statistics, and image galleries based in large measure on material provided by local history enthusiasts and former residents of those places.[21]

The core exhibition occupies more than 4,000 square metres (43,000 sq ft) of space. It consists of eight galleries that document and celebrate the thousand-year history of the Jewish community in Poland – once the largest Jewish community in the world – that was almost entirely destroyed during the Holocaust. The exhibition includes a multimedia narrative with interactive installations, paintings and oral histories, among other features created by more than 120 scholars and curators. One item is a replica of the roof and ceiling of a 17th-century Gwoździec synagogue.[5][22]