It was with a mixture of joy and deep relief that I read the media reports of your strong response to the imminent passage of a Polish bill that would deny compensation to survivors whose claims had hitherto not been settled during the past 30 years. The extremely harsh statement by Polish Prime Minister Mateusz Morawiecki that “Poland will surely not pay for the German crimes. Not a [Polish] zloty, not a euro or a dollar,” carried a very dangerous message that went way beyond the financial aspects of the restitution bill currently under consideration in the Sejm, Poland’s parliament.

In practical terms, it meant that Poland would not offer any financial compensation for stolen property if, for any reason, the property in question could not be returned to its Jewish owners or their heirs. In the eyes of the leaders of the country’s ruling Law and Justice party, neither Poland nor Poles bear any blame for Holocaust crimes, and therefore there is no justification for Jewish demands for restitution by Poland. This highly distorted narrative of the Shoah, which virtually absolves Poland of any guilt despite the widespread complicity of individual Poles in Holocaust crimes, is typical of the false narratives of the history of the Holocaust that have spread throughout post-Communist Eastern Europe since 1990 following the fall of the Soviet Union.

The bill deserved a very firm rebuke from Israel, which until now has declined to speak out, and your assertion that “preserving the memory of the Holocaust, caring for the rights of survivors and among them, the return of Jewish property stolen during the Shoah, are central elements of the identity of the State of Israel,” was a breath of fresh air coming from Jerusalem. Israel has virtually ignored Eastern Europe’s Holocaust distortion for the past three decades, so your rooting of Israel’s obligation to defend Holocaust memory in its “moral and historical values” was a fitting and welcome response.

Eastern Europe’s steps to distort history have taken many different forms, the most serious of which is the outrageous rewriting of the Holocaust narrative to achieve a number of goals. These include the attempt to hide, or at least grossly minimize, the role of local collaborators in Holocaust crimes, whereas we know that Eastern Europe’s collaboration with the Nazis uniquely included participation in the systematic mass murder of Jews. 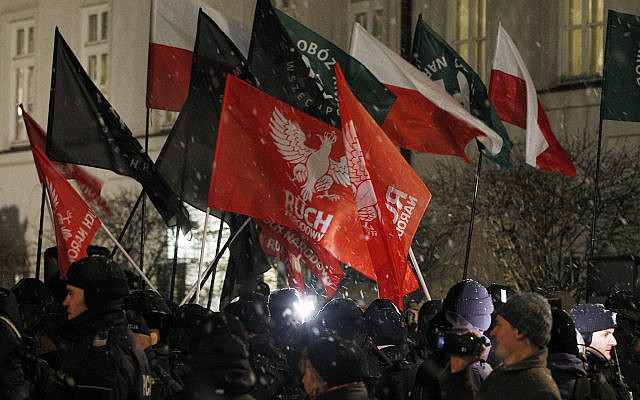 In this February 5, 2018 photo, far-right groups hold a demonstration in front of the presidential palace to call on President Andrzej Duda to sign a bill that would limit some forms of Holocaust speech in Warsaw, Poland. (AP Photo/Czarek Sokolowski)

In addition, Eastern European countries are attempting to promote the canard of equivalency between Communism and Nazism and to insist that the former carried out a genocide against the peoples of Eastern Europe. This issue is particularly important given the involvement of (individual) Jews in the Communist leadership. If Jews helped commit genocide, then how can they criticize us, the former Soviet states, for helping the Nazis commit against the Jews of Europe?

They seek to whitewash the Holocaust crimes of their heroes, those who led the post-World War II struggle against the Soviets. Unfortunately quite a few of these “heroes” actively participated in the persecution and/or mass murder of their Jewish fellow citizens, which should have automatically disqualified them from being glorified. Throughout Eastern Europe, such Holocaust perpetrators are honored in many ways, an outrageous insult to their victims.

And finally, they aim to promote the establishment of a joint memorial day for all the victims of totalitarian regimes, i.e., Nazism and Communism, which would make International Holocaust Remembrance Day totally superfluous.

One would have expected the State of Israel to lead the efforts to combat this problem from its inception. Instead, our government has refrained from criticizing this outrageous distortion of Holocaust history, with the exception of an effort to derail the Polish bill passed in 2018 that made attributing any Holocaust crimes to the Polish state a criminal offense. And even in that case, Israel signed an agreement that basically recognized the fake Polish narrative that created a false symmetry between Polish complicity in Holocaust crimes and the efforts by Poles to save Jews. Obviously, there were political motives behind Israel’s refusal to protest these lies, but there were ways to engage these countries on these issues without sacrificing the Jewish narrative of the Shoah.

The dismal results speak for themselves. The massive complicity of local Nazi collaborators in the mass murder of Eastern European Jewry has been to a large extent erased. Monuments to the killers abound in countries such as Lithuania (where mass murder sites have even been privatized), Ukraine (where marches honoring Holocaust perpetrators are annually held, not to mention statues and other recognition), Latvia, Croatia, Estonia, and other honors are bestowed on collaborators in Albania, Macedonia, Hungary and Romania.

Our ambassadors throughout Eastern Europe were not allowed to respond to these measures and our silence only encouraged additional insults. The time has come to face these issues. First of all, by expressing our criticism of the distorted narratives and offering to initiate a dialogue between historians to restore the accurate version of the events of World War II and the Shoah. We have to make clear to our new allies in Eastern Europe that we appreciate their friendship and support, but we cannot betray our victims, and the sooner these countries face the truth, they will emerge from under the shadow of their lies, and this will pave the way for greater sensitivity and consideration for their suffering under Communism, an extremely important issue for all of them.

Minister Lapid, I am fully aware of the many difficult challenges you face as foreign minister during these trying times, but I hope that you will take the necessary steps to change the very flawed policy pursued in Eastern Europe by previous governments, which only encouraged them to promote a totally false narrative of the annihilation of Jews during the Holocaust.