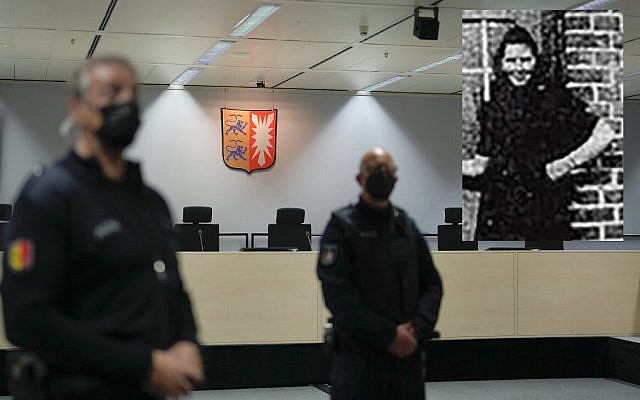 Judicial officers stand in the empty court room of the Langericht Itzehoe court prior to the trial of a 96-year-old former secretary of the SS commander of the Stutthof concentration camp in Itzehoe, Germany, September 30, 2021. (AP Photo/ Markus Schreiber, Pool). Inset shows Irmgard Furchner.

What does it take to ensure that a Nazi criminal convicted these days in Germany will actually be sent to prison? That is a question which has bothered me for about a decade, ever since Ivan Demjanjuk, who was convicted for “accessory to murder,” in Munich on May 12, 2011, for his service in the Sobibor death camp, and was sentenced to five years in jail, was allowed to remain a free person until his appeal against the verdict was decided. Thus, Demjanjuk was allowed to live in an old age home in Bad Feilnbach, awaiting the court’s decision, and he died on March 17, 2012, before his appeal was reviewed. He did not serve a single day of his sentence from the German court. (At least, he was incarcerated for more than seven years in Ramle Prison, and was also in prison in the United States on several occasions and in Germany pending his trial in Munich.)

The Demjanjuk trial was of unique legal significance in Germany, because it paved the way for several subsequent trials of Nazi perpetrators, two of which were supposed to have begun during the last two weeks. For several decades prior to the Demjanjuk case, in order to prosecute a Nazi war criminal, the prosecution had to present proof that the suspect had committed a specific crime, against a specific victim (preferably identified by name), and had done so motivated by “racial hatred.” Naturally, these requirements severely limited the number of cases prior to 2008, when Thomas Walther and Kirsten Goetze, prosecutors at the Central Office for the Clarification of Nazi Crimes in Ludwigsburg, convinced their superiors to apply a precedent used to convict the plotters of the attacks on the Twin Towers in New York of “accessory to murder,” rather than murder. This change meant that any person who served in a Nazi death camp, or in the Einsatzgruppen (mobile murder squads, which murdered approximately a million and a half Jews by shooting in the areas of the Soviet Union) could be convicted on the same charge and sentenced to 5-to-15 years in prison based on service alone, which could be verified by documents, and did not require witness testimony regarding specific crimes.

Following Demjanjuk’s conviction, the German authorities began searching for such individuals and have been able to convict two men who served in Auschwitz and one who served in Stutthof. (The trial of another guard from Stutthof was halted due to medical issues.) All the defendants in the trials completed were convicted, but those who served in Auschwitz appealed the verdict and died before they were required to serve their sentences, while the guard from Stutthof was given a suspended sentence because of his young age at the time of the crime. Needless to say, as a person who believes that punishment, in these cases incarceration, is an important component of justice, my assessment of these results was somewhat ambivalent. A measure of justice is obviously far superior to no justice, but the lack of punishment diminishes the impact and significance of the trials.

Sometimes, however, there are surprises, even in Germany, and even in these cases. Two weeks ago, the trial of Irmgard Furchner, the secretary of the commandant Paul-Werner Hoffe of the Stutthof concentration camp was scheduled to open. She served in the camp from June 1943 until April 1945, during which time there were numerous executions in the gas chamber built in 1943, and as well as in gas vans and by shooting. She was charged with complicity in the deaths of more than 11,000 inmates. Several weeks before the opening date of September 30, however, Furchner wrote to the court, claiming to be ill, and expressing her refusal to participate in the proceedings in order to spare herself the embarrassment and not make herself “the mockery of humanity.”

Being aware of the content of this letter before it was publicized, I guessed that Furchner would not appear at the court, and chose not to travel to Itzehoe, the site of the trial, and to wait for developments. I did not imagine, however, what would actually happen. On that day, Furchner chose to run away from her home, which, given her age of 96 and supposed infirmities, was absolutely shocking, and which turned out to be, from my perspective, a pleasant surprise. Furchner was caught the same day in Hamburg, and was thrown into jail, the first of the defendants of the cases of “belated justice” to be punished by incarceration. Released a week later, her trial will commence on October 19, and given the fact that she will be tried in a juvenile court, it is very likely that the seven days she spent in jail will be the only ones, unfortunately, that she will have to have endured.