Several years ago, Nazi hunter Efraim Zuroff went to dozens of murder sites in Lithuania as part of his continued efforts to assign rightful blame to Lithuanian culprits and Holocaust-era Nazi collaborators who helped facilitate the murder of the country’s Jews during World War II.

Over the course of his travels, Zuroff forged an unlikely partnership with celebrated Lithuanian author and cultural figure Ruta Vanagaite, who was looking to make amends for her own ancestors’ part – either assisting or bearing silent witness – in the genocide of Lithuania’s Jews.

The unlikely duo’s story – part “buddy film” and part true-crime exposé – is the subject of Zuroff’s newly published book, “Our People: Discovering Lithuania’s Hidden Holocaust,” which he co-authored with Vanagaite.

Journalist Matthew Kalman spoke to Zuroff, chief Nazi hunter, director of the Israel office, and head of Eastern European affairs at the Simon Wiesenthal Center, on August 19 for The Times of Israel’s new Behind the Headlines online video series. 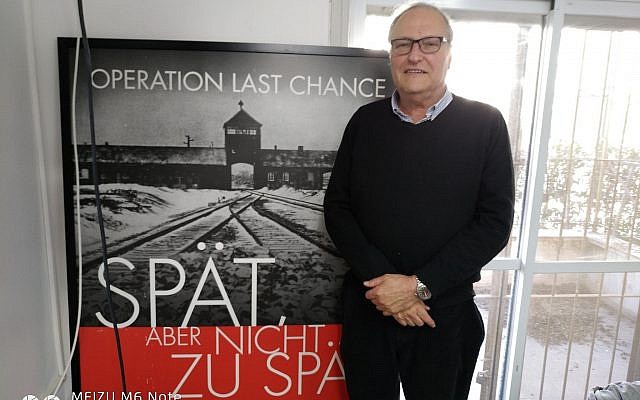 “What was hidden was the very extensive role played by the local collaborators, which the government, in the narrative that it fashioned when it became independent, has been trying very hard to hide,” Zuroff said.

“In other words, when the government has a commemoration or an event, you will hear them say, ‘This is a terrible tragedy, we lost our Jewish community, the Nazis came to our country and murdered our Jews.’ And if someone would press, or ask what about the local collaborators, they’d say, ‘These were marginal elements of society, these were degenerates, they’re not part of us,’” he said.

What was hidden was the very extensive role played by the local collaborators, which the government, in the narrative that it fashioned when it became independent, has been trying very hard to hide

Now, more than 75 years after the liberation of Auschwitz, a Nazi hunter’s work may appear to be winding down – the number of still-living Nazi war criminals is dwindling, and trials – especially ones ending with convictions – are increasingly rare. Still, Zuroff says, his mission is far from over as he continues to fight against Holocaust distortion and historical revisionism in Eastern Europe.

Many countries in Central and Eastern Europe are reluctant to accept culpability for the crimes that many of their citizens – and even parts of their governments – committed while their countries were under Nazi occupation. Instead, they seek to portray themselves as parallel victims of German atrocities, while also highlighting the difficulties they faced during the subsequent decades of Communist rule.

“The same motivations that brought me to the efforts to facilitate justice are certainly there for the same reasons, to fight for the accuracy of the narrative,” Zuroff said. “Lithuania bears a lot of the blame… for leading the movement to create symmetry between Nazi crimes and Communist crimes.”

“They want to compare the country that conceived, built, ran the biggest mass murder factory in human history, Auschwitz-Birkenau [in then Nazi-occupied Poland], to the country, with all its flaws – and I don’t want in any way to minimize Communist crimes – that liberated Auschwitz and stopped the mass murder,” Zuroff said.

Check out previous Behind the Headlines interviews:

Offering a balanced and comprehensive look at some of today’s issues, the Behind the Headlines series will see Times of Israel reporters and editors interviewing influential individuals from a wide spectrum of fields. It is first available exclusively for Times of Israel Community members.

Become a Times of Israel Community member to gain access to our Behind the Headlines series and all of our upcoming exclusive webinars. You’ll also gain an ad-free experience of The Times of Israel site and apps, and a weekly insider letter from David Horovitz.

If you are already a Times of Israel Community member, you’ll continue to receive links to the series, along with many other new offers, by email.